County Durham boasts a fantastic range of housing options to suit all tastes. It has high-quality, new-build developments including stunning executive homes and more traditional period properties in an unrivalled choice of rural, coastal and urban locations.

According to HM Land Registry, house prices are some of the least expensive in the UK at £123,123 – around 46% cheaper than the national average. This makes it a particularly attractive place for those relocating and wanting to invest in an affordable property.

Combined with a fantastic quality of life and some of the shortest commuting distances in the UK, the county is highly attractive in terms of UK living standards.

More than 87% of primary and secondary schools in the region are rated “good” or “outstanding” by Ofsted – the third highest percentage of any English region. This is particularly important for employees with families who are considering relocating from other parts of the country.

There’s a huge variety of things to see and do in Country Durham and the wider north east region. You can visit historic museums or medieval castles such as Raby, Durham and Auckland – the latter is home to the spectacular open-air event, Kynren, which charts an epic tale of England through the ages. Alternatively, you can explore the colourful and dramatic landscape of Durham’s heritage coast with its stunning beaches, rugged cliffs and imposing headlands. Weardale and Teesdale – home to the magnificent High Force Waterfall – offer a variety of stunning walks and further afield there’s the beautiful countryside and unspoilt coastline of Northumberland to explore, as well as the ancient site of Lindisfarne, Alnwick Castle and Gardens, and Hadrian’s Wall.

County Durham is a magnet for investment, as illustrated by the fabulous Milburngate development, a 450,000 sq ft scheme comprising office, retail, leisure and residential space. It also has a busy events programme that provides plenty of cultural entertainment. The pinnacle of this is Lumiere, the UK’s largest light festival which takes place in the county every other year, attracting local and international artists to create works that reimagine familiar buildings and public spaces.

Durham City has a vibrant retail and hospitality offering as well as a wide range of first-class facilities for the whole family. These include state-of-the-art sports and leisure centres, golf courses, parks, live music venues, theatres and galleries, vibrant bars and Michelin-starred restaurants such as Marco Pierre White’s Steakhouse Bar & Grill, which treats guests to signature steaks, timeless English and French classics, and a comprehensive selection of premium cocktails. Many visitors to the county also sample Durham’s popular Gala theatre, which showcases the best musicals, films, comedies and dance productions.

For shopaholics, Durham City has a range of independent shops plus Newcastle and the Metro Centre in Gateshead, one of Europe’s largest shopping centres, offer a fantastic mix of high street names, department stores and one-off boutiques.

There’s no shortage of sport in the North East, which is home to Premier League football, Premiership rugby union and top tier British basketball. County Durham also hosts international cricket at its picturesque Riverside ground, which is situated against the backdrop of the famous Lumley Castle. 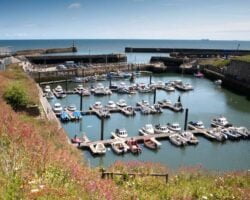 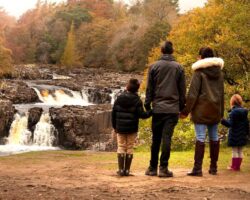 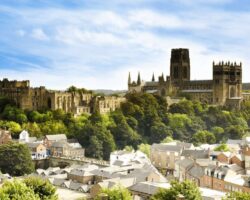