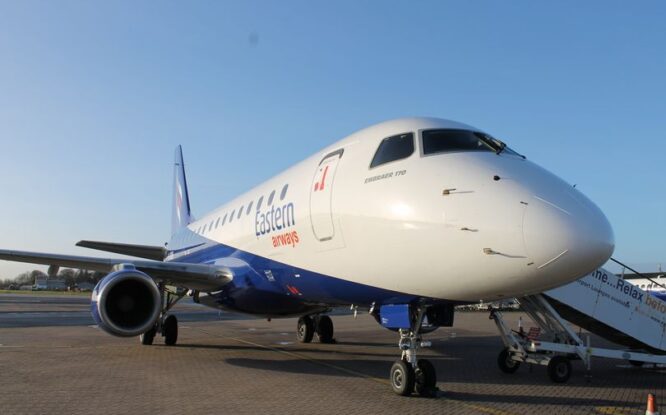 Eastern will reconnect the North East after a gap of more than a decade from September 14, with an initial daily flight on a 76-seat Embraer 170 aircraft.

It is the latest expansion from the airport, with Aberdeen and Belfast services reintroduced and London City and Newquay added since lockdown restrictions eased.

The major coup for the Kirmington team has arisen due to reduced flying as a result of Covid-19, with pride in being first to get a UK region back served from the flagship airport underlined. It comes after British Airways cancelled a Leeds Bradford service two months ago.

Roger Hage, Eastern Airways’ general manager for commercial and operations, said: “As the UK’s regional airline, the opportunity for Eastern Airways to connect Teesside to London Heathrow – the UK’s primary hub for worldwide connections – is significant in the region’s economic prosperity and economic recovery.

“Offering an initial daily e-Jet operated service helps add further London capacity and makes reaching the capital or getting to the North East a little over an hour away, with the array of connections worldwide this opens up. We look forward with our partners at Teesside International Airport and London Heathrow Airport to restoring such a major air-link missing for over a decade.”

Heathrow flights will start from £54.99 one-way, including taxes and charges, with all fares including 15kg of complimentary hold baggage.

Eastern will fly into Terminal Two, with Monday to Friday services departing at 12.40pm, touching down at 1.50pm in the capital, with return flights leaving at 2.30pm, arriving in the North East at 3.40pm.  Saturdays will see Eastern head south at 8.15am, with flights at 1.40pm on a Sunday, returning at 10.30am and 3.30pm respectively. Seats are now on sale.