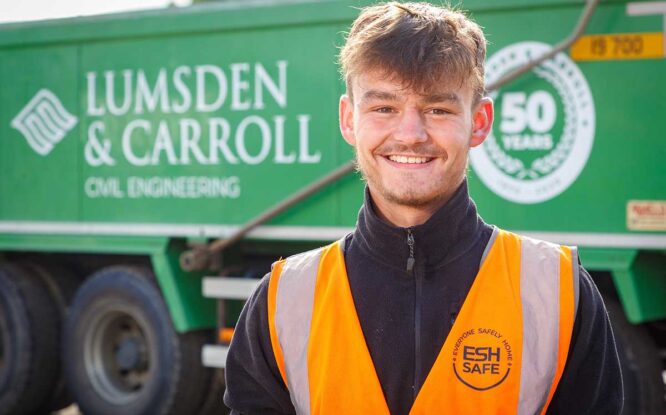 An aspiring worker who was told he’d never be able to work in construction due to a rare eye condition, has just been named one of the industry’s most promising prospects.

Apprentice Groundworker at Lumsden & Carroll Civil Engineering, Jordan Davies, has been awarded ‘rising star of the year’ at the Derwentside College apprenticeship awards.

The 20-year-old from Crook left Parkside Academy in 2018 and planned to enrol onto a construction course at a local college, but was sadly told that due to his health condition, known as ‘optic atrophy’, he should give up all hopes of working in the industry and pursue something else. It’s a condition that affects the nerves which carry impulses from the eye to the brain and results in problems with vision.

Initially deterred, Jordan pursued a role in a warehouse instead but his aspirations to work in construction did not waver. In 2021, Jordan came across a job advert for the role of Groundworker Apprentice at Lumsden & Carroll, part of Esh Group. Less than one year into his apprenticeship, Jordan has now scooped the prestigious accolade with a career path in construction being mapped out for him at the Durham-based firm.

His employers at Lumsden & Carroll say he has made a huge impact on site, having gained experiences on projects including Newcastle Great Park and Kenton Bank Hill.

Ian Metcalf, Adoption Manager at Lumsden & Carroll said: “Jordan’s enthusiasm is infectious, he is a breath of fresh air in an industry that can struggle to attract young candidates. He is a trusted member of the team, and we are so proud of all he has achieved with us.

“He has proven himself to be an asset to our squad and has continued to work above and beyond what could be expected of someone still learning their trade. We wanted to give Jordan a chance to pursue his ambition of working in the construction industry, and he has more than proved wrong those who might have doubted him.”

Commenting on his award win, Jordan said: “I never thought I’d be able to do this job and didn’t expect to achieve as much as I have, let alone win an award for the work I have done. My eye condition can impact my work, it sometimes takes me a little longer to get the job done, but everyone understands, and I am never rushed.

“I’d like to say a special thanks to my Line Manager, Ian Metcalf, for giving me this opportunity and taking a chance on me, hopefully this award has proven that he made the right choice. I’m proud to work here and I look forward to what my future holds within the company.”

The company currently employs 32 apprentices in a wide variety of roles and levels, ranging from Level 2 up to degree apprenticeships. Recruitment for 2022’s apprentice intake is set to commence in July this year and vacancies will be advertised online https://www.eshgroup.co.uk/careers/vacancies/