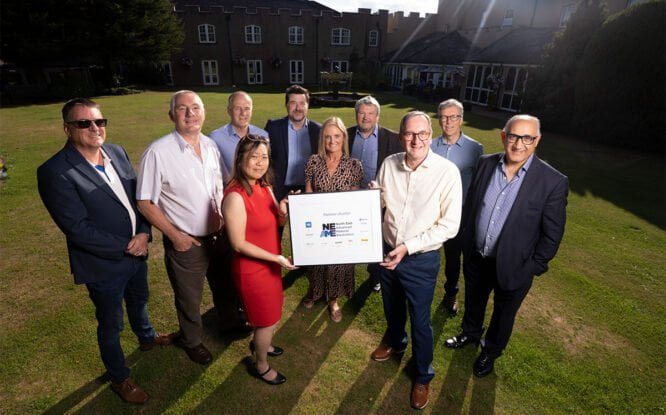 A number of North East-based companies working in advanced material electronics have launched a cluster group at a national conference being held in the region.

The North East Advanced Material Electronics cluster group (NEAME) has been established to showcase the regional capability, which goes beyond conventional and high-volume compound semiconductors.

A cluster of companies in the North East are developing exciting new forms of semiconductor technologies and applications used in many everyday items from sensors and imaging technologies for internet-connected household objects to satellite and mobile communications.

The sector makes a significant contribution to the regional economy and is projected to contribute £447m Gross Value Added by 2026, with the potential to create and support around 4,500 jobs.

International factors mean all companies in the sector face significant supply chain challenges.  The group, which is led by Chief Executives and other senior decision-makers will act as a single voice to raise the profile of the region’s competencies and address their main challenges and opportunities.

The regional businesses are developing new technologies that will overcome the limitations of the traditional silicon-based devices. The North East is home to a number of highly innovative and growing companies in the sector.  Nine founding businesses are involved, they include:

PragmatIC – which has raised $90m to build a semiconductor production facility at Meadowfield Industrial Estate in Durham. This is the first large-scale semiconductor manufacturing facility to be announced in the UK for several decades and will house the very first state-of-the-art 300mm fab in the country.

Evince  – which are delivering pioneering outcomes using diamond technology bringing with it a new era in electronics which they believe offers 5 to 50 times better performance than any other electronic material.

Richard Gibbs, Filtronic Chief Executive Officer said: “NEAME is an opportunity to showcase this region’s strength within advanced material electronics. What has always struck me about this area is the level of innovation that is happening every day on our doorstep.”

Ken Williamson, Pragmatic Chief Operating Officer said: “The North East of England is a powerhouse for innovation and quality in advanced material electronics. At Pragmatic we have demonstrated our commitment with our investment in PragmatIC Park, we believe this represents the future of UK semiconductor manufacturing.”

NEAME was launched as part of NMI (National Microelectronics Institute) national conference, which was being held at Ramside Hall.  Jillian Hughes, NMI Director who hosted the launch said: “NMI are delighted to be continuing our support of the UK semiconductor industry by hosting the announcement of the NEAME during our Annual conference.  During the last 25 years we have supported the semiconductor design, manufacturing and supplier communities adding value through collaboration, networking and knowledge sharing.”

Paul Howell, MP for Sedgefield who officially launched the group said: “The North East continues to pioneer and develop new technologies that can have a huge impact on a global scale. The formation of NEAME highlights the strength of the region’s growing advanced material electronics sector and presents an opportunity to develop the skills and the jobs of the future, establishing the North East as a global hub for this technology.”

Details of NEAME can be found on their website including how to join the network at www.neame.org.uk