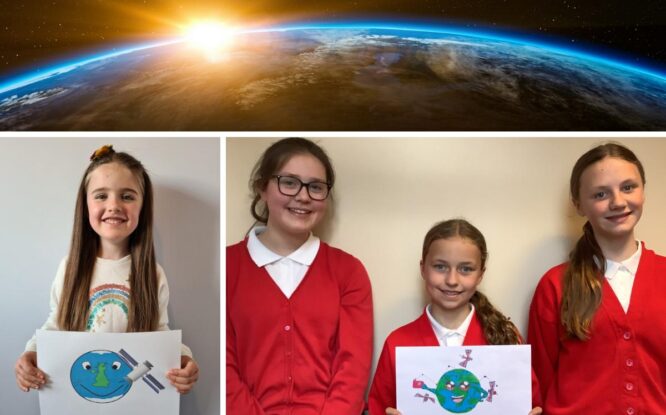 Four girls have claimed prizes in the North East leg of a national competition to design a logo that will be displayed on the first rockets launching small satellites from the UK later this year.

Freya Brown, 10, Emily Frankland, 11, and Alice Stobbart, 11, of Chester-le-Street, worked together on a cheerful design depicting a cartoon Earth holding a camera, linked up to an orbiting constellation of small satellites decorated in Union Jack colours.

Meanwhile, six-year-old Inara Kell, of Saltburn, used a computer to design a smiling Earth – with a nose in the shape of the UK – peeping out from behind a satellite.

More than 10,000 primary school children aged between 4 and 11 years old entered the Logo Lift Off competition, which was run by the UK Space Agency in collaboration with Hopscotch Consulting to encourage the next generation to consider a career in the space sector.

The overall winner, announced on the International Day of Human Spaceflight (April 12), was six-year-old Callum Wilkinson from Bolton, who will have his logo displayed on the rockets.

As regional winners, the girls will receive personalised certificates, goody bags, a Science, Technology, Engineering, Art and Mathematics (STEAM) learning kit, and an opportunity for their classes to attend an online talk with a UK Space Agency representative.