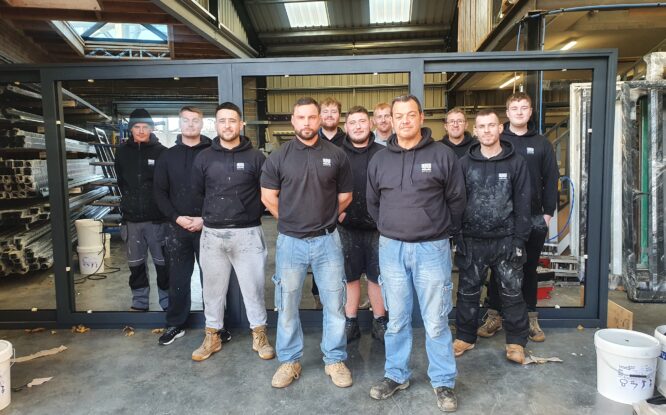 A manufacturing company of bi-fold doors is targeting continued expansion after taking on additional space and investing in new machinery with the support of the County Durham Growth Fund.

North East Bi-Folds, based at Cold Hesledon Industrial Estate, was set up in 2016 by partners Tony Meah and Chris Craggs.

The duo, who were working in the building industry, decided to go it alone after spotting a gap in the market for the supply of bi-fold doors.

Since then, growth has been organic and rapid, with the company now employing 12 people including two though the Government’s Kickstart scheme kick-starters and three new employees joining the business in the new year.

However, a lack of space and out dated machinery was hampering the company’s full potential and after a conversation with their accountant, they decided to approach the County Durham Growth Fund.

Andrea Meah, who is married to Tony and recently joined the business on a full-time basis to look after administration and customer orders, said: “We’d grown rapidly and had reached a point where we were supplying most of the house-builders in the North East.

“However, we needed more space and the machinery we were using was old and was starting to malfunction, so we knew if we were to continue to grow, we needed to invest.

“Our accountant suggested that we apply to the County Durham Growth Fund for grant support and thankfully we were successful.”

The company used the grant to createanadditional630 sq metres of space next to its additional premises and purchase new cutting equipment, which enables the bi-fold doors to be manufactured in a more efficient and cost productive way.

The County Durham Growth Fund is managed by Business Durham in partnership with UMi and is supported by the European Regional Development Fund (ERDF). All successful grant applications are appraised by UNW LLP, an independent firm of chartered accountants and business advisers.

Sarah Slaven, Managing Director at Business Durham, said: “North East Bi-folds started with just two directors and a fabricator and now employs 12 people with the workforce expanding further in the new year. Now, with the support of the County Durham Growth Fund, the company is in an even stronger position to bring in bigger contracts, supporting long-term expansion in East Durham.”

Simon Allen, Investment Centre Director at UMi, said: “The fund is there to support home-grown businesses like North East Bi-Folds, which require additional support to implement ambitious plans for expansion and job creation.”