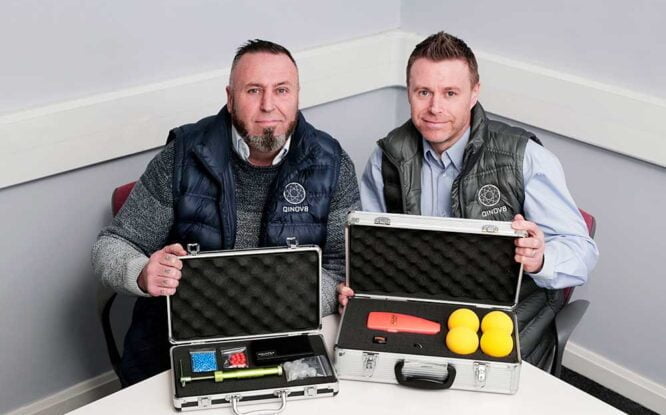 Brothers Mark and Michael Quinn, from Coundon, near Bishop Auckland, formed Qinov8 to develop and sell their unique AquaNav and AquaPea systems, which they say will “revolutionise” the way suppliers deal with damaged water pipes, saving time, money and precious water.

Senior contracts manager Michael said potential growth is “phenomenal” and could quickly push revenue through the £1m mark, as the firm moves into large premises on the Dabble Duck Industrial Estate, in Shildon, and looks to create at least ten jobs over the next two years.

“The interest we’re getting and the reaction to the products is incredible,” says Michael. “We’re in talks with almost all the major UK water suppliers, including Thames Water, Severn Trent Water, United Utilities and Scottish Water, as well as with companies in America, Australia and South Africa. If talks turn to licensing agreements then projected growth is frightening.”

Qinov8 has developed the AquaNav system to locate leaks inside large plastic water mains, at a depth of 16 feet to 45 feet underground. With a transmitter encased in a waterproof buoyancy carrier, the AquaNav travels along the pipe at walking pace until it locates and stops at the source of the leak, the whole time sending a signal to a hand-held receiver above ground.

Qinov8’s AquaPea system is designed to repair leaks in smaller, domestic water pipes. The pea-sized specially formulated material is placed into the pipe and allowed to freeflow, drawn to the source of the leak by the flow of escaping water. On finding the leak, the unique material hardens and repairs the pipe from the inside. The Aquapea has been tested and proved to remain in place for in excess of 20 years.

With support from Business Durham, the economic development organisation working on behalf of Durham County Council, Qinov8 moved to the Dabble Duck Industrial Estate to benefit from the unit’s modern offices alongside a large open space for continual product testing.

Peter McDowell, Business Durham’s business property director said: “Qinov8 has hit the ground running, making an immediate impact in the water industry at a time when the costly disruption of leaks and burst mains is hitting the headlines hard.

“Mark and Michael are prime examples of entrepreneurialism at its finest and our team are delighted to have been able to help the company thrive and grow at Dabble Duck Industrial Estate and we look forward to continuing to support them with their ambitious plans.”