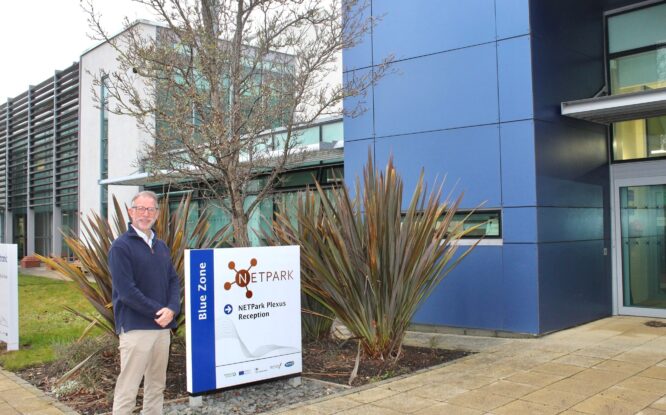 As the internationally renowned security and space engineering company, RHEA Group gets ready to celebrate its 30th anniversary later this year, the group’s Chief Commercial Officer John Bone gives some insight into why NETPark was the perfect place to open their new UK office.

RHEA Group is a security and space engineering company providing services to the most respected organisations in aerospace, security, and defence across the world.

The group has grown rapidly in recent years and now operates in 11 countries across Europe with its headquarters in Belgium. They have three offices in the UK including their most recent UK base here at NETPark. When Chief Commercial Officer John Bone joined the company four years ago, RHEA  employed just over 350 people. Since then, the company has more than doubled in size with over 700 staff now on the payroll.

RHEA moved to their NETPark office in March 2022, the decision largely due to the emerging space and satellite sector in the North East. The North East Satellite Applications Centre of Excellence, based at NETPark has been instrumental in supporting the growth of the sector. Today the sector is worth £88 million to the UK economy and in 2021 saw the number of businesses working in space increase by 50%.

Collaborative projects make up a large part of RHEA’s work, something that John hopes they can tap into at NETPark. John said: “There were many reasons we moved to NETPark, a better quality of life, excellent transport links and the growth of the North East space sector. But the thing that attracted us to NETPark, in particular, is the appetite for collaborative working. We have benefitted hugely from the support of The North East Satellite Applications Centre of Excellence (NESACoE). We are already working on collaborative projects with businesses we have met through NESACoE and I think that will continue for many years to come.”

NETPark Manager Janet Todd added: “We are delighted that RHEA has chosen to open another UK office here at NETPark. RHEA is a growing company, making great strides in space and satellite technology across the world. It is an exciting time to be at NETPark. Work starts later this year to add 270,000 sq ft of space giving growing companies like RHEA  Group options to grow on the park when they are ready to scale up operations.”

One of RHEA’s biggest clients is the European Space Agency (ESA). The Belgian headquartered business provides over 250 experts to assist ESA with knowledge in mission design, thermal engineering, Earth observation, Space science and with operations specialists to ensure a successful mission from start to finish. RHEA also works with the UK Space Agency providing similar services and systems.

RHEA has services and skills in security, helping clients secure both physical threats such as space debris in orbit as well as monitoring, managing and minimising cybersecurity threats.

Other services include software to make sense of big data sent by satellites. The product overlays the data with artificial intelligence to deliver practical applications for customers. One application for this is being investigated with a large water company to use Earth observation data to track pollution levels in rivers.

Looking ahead RHEA has ambitions to continue to grow its business. Plus, with security and defence giants Lockheed Martin, announcing they are “exploring options for a new facility in the North East” and the flourishing North East’s space and satellite sector, mean there is no reason why that growth won’t take place at NETPark.